An Excerpt from “Relentlessly Pursuing Wonder: 9th Gathering of the Annual CUSP Conference”

Here’s a thoughtful reflection on the work of Bill Thomas by Nate Burgos of Design Feaster.  This is just an excerpt from the whole piece, which explores wonder from a variety of perspectives.  I’m struck by the phrase “Start living your damn story.”  Are you living yours? Tell us how… 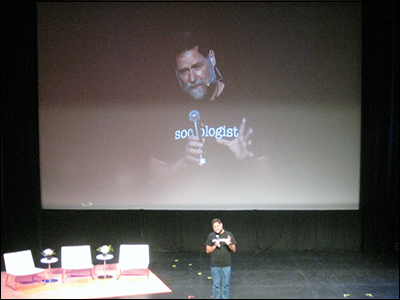 The wonder of mortality

Where Givens instilled the wonder of exploration throughout the landscape and, in turn, life, Bill Thomas, a doctor in geriatric medicine, instilled wonder through examining the process of aging. Instead of using typical phrases, such as “a life’s work” or “legacy,” he used another typical, romantic figure of speech: Story. To Thomas, life is storied. Paired with his emphasis on “aliveness” and “presence”, his urgent homework for the audience was: “Start living your damn story.” This is an open story—open to possibility, open to interpretation. Life is a story open to everyone, though prejudices persist, across the human timeline of aging, particularly against the elderly. Thomas’ remedy for ageist attitudes: Look in the mirror. Like Givens’ cherished camera, Thomas’ emotive tool is the mirror, because it doesn’t lie. It doesn’t show the insides, but the surface is sharply visible and changing—all the time. As the Nobel Prize-winning playwright Harold Pinter observed, “When we look into a mirror, we think the image that confronts us is accurate. But move a millimetre and the image changes. We are actually looking at a never-ending range of reflections.”

Thomas addressed the wonder of mortality. Being the creator of a national touring “non-fiction theater” roadshow called the “Age of Disruption,” I could imagine him collaborating with comedian C.K. Louis, whose views on life and living wreak of intuition. Such as his affirmation: “‘I’m bored’ is a useless thing to say…The fact that you’re alive is amazing, so you don’t get to say ‘I’m bored.’” This provokes a jabbing note to self.

Through his audio message, Ivers delivered the same note regarding age—the resounding note of one’s mortality. Thomas straight-up said, “Immortality robs us of all of our lives.” Painfully obvious with that first part of his statement, at the same time, positively profound with the second part of his statement. People don’t live forever, but the story (to borrow Thomas’ noun) they tell with their lives lives on. Immortality can be viewed as short-term thinking and this comes with a short-term fuse in attitude, resulting in random acts of short-term temper, short-term patience, ultimately, short-term civility. Scary version, these realities are also intended. They make life that much more short-lived.

Changing Aging with Dr. Bill Thomas April 24, 2018
Making Peace with the Past March 28, 2016
Stronger Together: Deepening Employee and Family Member Relationships May 31, 2018